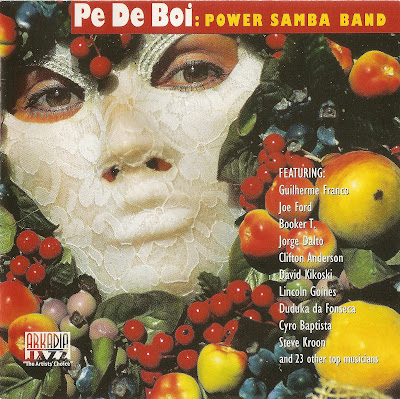 Pe De Boi the power samba band whose pulsating rhythms have electrified the New York club scene since 1980, produced only one memorable album during its nearly two decade-long existence which you hold in your hand. Born of the rich Brazilian musical tradition and inflected with elements of American jazz, rock and salsa, the songs on this album feature as many as 10 different percussionists. Band founder and leader, Guilherme Franco - a native of Brazil, a veteran of the McCoy Tyner group and one of the leading jazz percussionists in the world - named his group for a Brazilian slang term whose literal translation is the "foot of an ox" but whose real meaning is a musician with a great sense of rhythm.

Material for the album includes some Brazilian standards and compositions written specially for the album. From its beginning in the streets of New York, IV; has gone on to  perform at Giant Stadium, S.O.B.'s, The Byrne Arena, The Beacon Theatre, The Bottom Line, The Mudd Club, as well as the historic Peppermint Lounge, Danceteria, Studio 54 and jazz Forum.