The Bob Crewe Generation ~ Music to watch girls by 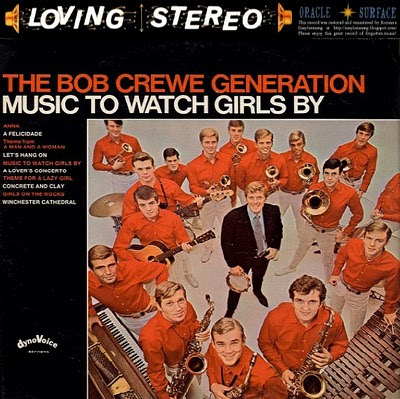 Pepsi used the slogan "Come Alive! You're in the Pepsi Generation" and a melody titled "Music to Watch Girls By" in their mid-'60s advertisements. Legendary producer Bob Crewe took his cue from the T-Bones, who had enjoyed a hit the previous year with an Alka-Seltzer jingle, and turned Pepsi's theme and slogan into the first Top 40 hit to bear Crewe's name as artist. The Bob Crewe Generation's rendition of "Music to Watch Girls By" went to Number 15 in 1967, and exemplified the groovy state of instrumental music at that time. The tune was soon recorded by Billy Vaughn and had to contend with competing vocal and instrumental versions by, respectively, Andy Williams and Al Hirt. The album Music to Watch Girls By made the Top 100 and featured the title track alongside instrumental versions of other well-known hits Crewe had written and/or produced, such as the Four Seasons' "Let's Hang On," Eddie Rambeau's "Concrete and Clay," and the Toys' "A Lover's Concerto." The B-side of the "Music to Watch Girls By" single, "Girls on the Rocks," was included too, as well as the ubiquitous "Winchester Cathedral." Hutch Davie's arrangements are eclectic in that distinctive late-'60s style, with horns, vibes, flamenco guitar and prominent percussion lending a vaguely ethnic feel. For a contemporary pop culture reference point, Music to Watch Girls By would have been perfectly suitable soundtrack material for the film Austin Powers.

Music To Watch Girls By

Email ThisBlogThis!Share to TwitterShare to FacebookShare to Pinterest
Labels: The Bob Crewe Generation