The Very Best Of Booker T & The MG's 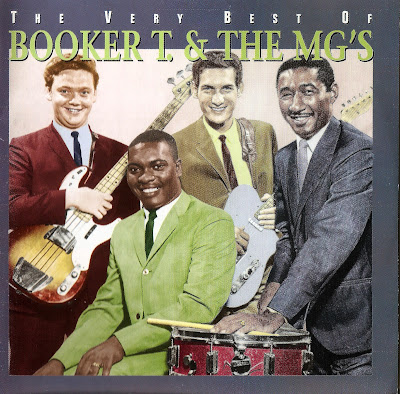 As the house band at Stax Records in Memphis, TN, Booker T. & the MG's may have been the single greatest factor in the lasting value of that label's soul music, not to mention Southern soul as a whole. Their tight, impeccable grooves could be heard on classic hits by Otis Redding, Wilson Pickett, Carla Thomas, Albert King, and Sam & Dave, and for that reason alone, they would deserve their subsequent induction into the Rock & Roll Hall of Fame. But in addition to their formidable skills as a house band, on their own they were one of the top instrumental outfits of the rock era, cutting classics like "Green Onions," "Time Is Tight," and "Hang 'em High."

The anchors of the Booker T. sound were Steve Cropper, whose slicing, economic riffs influenced many other guitar players, and Booker T. Jones himself, who provided much of the groove with his floating organ lines. In 1960, Jones started working as a session man for Stax, where he met Cropper. Cropper had been in the Mar-Keys, famous for the 1961 instrumental hit "Last Night," which laid out the prototype for much of the MG's (and indeed Memphis soul's) sound with its organ-sax-guitar combo. With the addition of drummer Al Jackson and bassist Lewis Steinberg, they became Booker T. & the MG's. Within a couple years, Steinberg was replaced permanently by Donald "Duck" Dunn, who, like Cropper, had also played with the Mar-Keys.

The band's first and biggest hit, "Green Onions" (a number three single in 1962), came about by accident. Jamming in the studio while fruitlessly waiting for Billy Lee Riley to show up for a session, they came up with a classic minor-key, bluesy soul instrumental, distinguished by its nervous organ bounce and ferocious bursts of guitar. For the next five years, they'd have trouble recapturing its commercial success, though the standard of their records remained fairly high, and Stax's dependence upon them as the house band ensured a decent living.

The time is tight

Email ThisBlogThis!Share to TwitterShare to FacebookShare to Pinterest
Labels: Booker T and The MG's