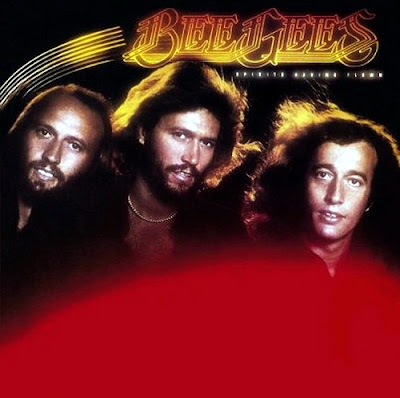 Spirits Having Flown was the most complex and ambitious album the Bee Gees ever worked on, taking much of 1978 to complete. Barry said that he felt it had to live up to the sensational success of Saturday Night Fever. This only heightened any tendencies the Bee Gees had toward perfectionism, Barry in particular. No doubt each song has many, many recording dates, as they carefully recorded and re-recorded each nuance, but none of the actual dates are known. There was a break from about the second week of May to the last week of July. Production was much more advanced than the group's previous albums, with heavy use of studio effects and multi-layered vocal harmonies. On the other hand, it meant that most of the songs on Spirits Having Flown were unsuitable for live performance.
Co-producer Albhy Galuten recalls Spirits Having Flown as being created primarily by Barry Gibb, Karl Richardson and himself putting in long days and nights at Criteria Studios. Blue Weaver recalls others being involved. Both agree that Robin Gibb was active behind the scenes in songwriting and offering feedback to the recording process, but Maurice Gibb contributes probably the least he did on any Bee Gees album. Not only was his alcoholism sapping his creativity, but he was having back pains finally diagnosed in 1980 as caused by a bad disk.
In the recording phase Robin and Maurice now mainly played the role of backing and harmony vocalists, and even in that capacity Barry did many of the vocal dubs himself as he went over and over the recorded work. Robin contributed one lead vocal ("Living Together") which was sung in falsetto with Barry providing alternating lead vocals in his normal register. This was Robin's lowest amount of lead vocals on any Bee Gees album with the exception of 1970's Cucumber Castle, for which he was not part of the group at that time. As with the last four Bee Gees albums, Maurice did not have any lead vocals.
The Bee Gees had been effectively typecast as a disco group after Saturday Night Fever, and in a 1978 interview Barry remarked "People think we're just about disco now. Of course that's not true. If you look at the SNF soundtrack, there's some dance music, but we also have ballads like More Than A Woman." In an effort to break away from this stigma, Spirits Having Flown contained no dance tracks.
The horn section from Chicago (James Pankow, Walt Parazaider and Lee Loughnane) made a guest appearance on this album. At the time, they were next door working on the Chicago album Hot Streets. Thus the Bee Gees would return the favour as they appeared on Chicago's song "Little Miss Lovin'" and their keyboardist Blue Weaver appeared on "No Tell Lover"