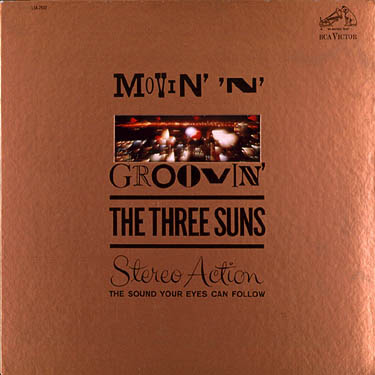 The story of stereo action
Stereo Action is a revolutionary new concept of stereo recording in which instruments, singers, whole sections, and even full orchestras are placed into movement so that the listener has, literally, music his eyes can follow.
Stereo Action is a conscious and deliberate effort to set music in motion by utilizing actual movement of instruments and sounds from one speaker to the other, and even, at times, suspending an instrument or sound between speakers. It is a pioneering concept in stereo listening, and resulted from years of extensive experiments and remarkable technical breakthroughs by the RCA Victor corps of engineers.
Stereo Action requires a wholly new approach to recording. Musical motion is first conceived by the composer and arranger. Every note of the music to be recorded must be scored with Stereo Action in mind, as if it were a new and dominating musical instrument or voice. An elaborate system of charting each and every instrument for proper stereo placement guides the actual scoring. In addition to the musical annotation, companion series of non-musical diagrams for the studio work is developed.
This wedding of musical artistry and electronic creativity produces Stereo Action -- literally, the sound your eyes can follow.

Sound, Dimension and Movement find the Three Suns once again Movin' 'n' Groovin'. Add to this performance brilliante, Blend aromatique, Taste magnifique and we sit down to a Suns-Stopper. The imaginative artistry of producer Al Nevins is again combined with the magic of arranger- composer Charles Albertine and, for the first time on records, that talented team -- which gave NBC- TV its theme music for Midnight Movie (Alone with the Blues) and Movie Four (Night Theme) --paints a picture for us in true depth of focus. Albertine has extended his musical thinking into fresh and unexplored worlds with his exciting arrangements for this stimulating new medium, Stereo Action. A very special bow to Alan Lorber (one of America's youngest arrangers) for his help musically in making this album possible. The musical core of the Three Suns -- the familiar guitar, accordion and organ -- has been here augmented by an extraordinary assortment of instruments, including jaw bone, wind bells, chains, tapping shoes, harpsichord, ad infinitum -- all gliding and sliding in a whirlwind of pattern and a maelstrom of motion, sometimes subtly and variously violent, but always Movin' 'n' Groovin'.