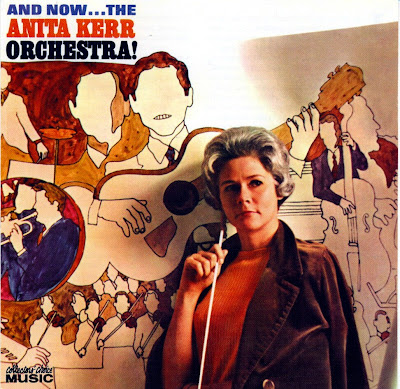 In the 1950s and early '60s, arranger Anita Kerr and her aggregate of backing vocalists helped to define "the Nashville Sound" -- having supported the likes of Eddy Arnold, Perry Como, Floyd Cramer, Red Foley, Jim Reeves, Hank Snow, and Roy Orbison. Along with the Anita Kerr Singers, she re-scored and re-recorded a number of concurrent crossover country and pop singles.

Released in 1966, And Now...The Anita Kerr Orchestra! was the first of five long-players that would bear her name during a brief but prolific run on Warner Bros. Records. It was likewise the only one to credit the Anita Kerr Orchestra, as opposed to the usual Anita Kerr Singers moniker. Her previous tenure in the music business gave her great insight into selecting and recasting the better-known tunes. Rather than a large and pompous display, she gives a refreshing lightness to the update of "Spanish Harlem," which absorbs just enough Latin influence to be effective. Returning briefly to her Nashville digs, Kerr turns up the infectiously fun syncopation of "Sweetie Baby" -- a song that initially gained prominence as the B-side to Floyd Cramer's mega-hit "Last Date."

Refusing to limit her inspirations to any specific genre classification, the swinging "Sermonette" comes from the Julian "Cannonball" Adderley songbook, while the anthemic staple of Americana "This Land Is Your Land" adopts a mod sax-fueled ragtime feel that all but abandons the preconception of its former folkie self. The bluesy "I Almost Lost My Mind" and the slight R&B vibe on "That's Life" are proof Kerr possesses something that her instrumental easy listening contemporaries rarely display...soul. The Italian pop hit "Con Te Spiaggia" could easily be the hippest entry of them all, with a light, bouncy backbeat and an oddly nasal-sounding "yeah yeah" singalong chorus. The cover ofDuke Ellington's "Mood Indigo" -- concluding the album -- stands as a singular triumph for the variety of solo instruments Kerr incorporates, ranging from an eerily lonesome electric guitar to a powerful brass section. In 2007, Collectors' Choice Music reissued several of Anita Kerr's Warner Bros. packages, including And Now...The Anita Kerr Orchestra!, making a sizable portion of her discography available for the first time in decades to a whole new generation of listeners.

I Almost Lost My Mind