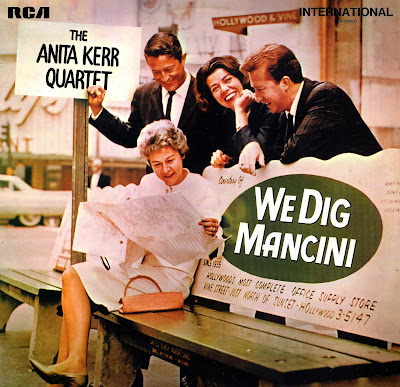 Some years ago somebody brought a very fine octet from Tennessee to New York to audition for Arthur Godfrey's Talent Scout Show. They were great, but I suggested that they would be less expensive and less cumbersome and, therefore, more practical in our business if they were to cut the outfit in half. Thus was born the Anita Kerr Quartet, an organization with which I have ever since been madly in love. Each member is an accomplished, educated musician (an oddity in itself these days), and each possesses a beautiful voice and knows how to use it. The Anita Kerr Quartet, which made this beautiful album, is probably the most popular singing group in the recording industry today. You have heard these voices many, many times whether you realized it or not. Anita and her group have turned out hit after hit with just about every major recording star in the business. I have been trying for years to get the Anita Kerr Quartet to come to New York as a regular feature of my daily radio show and to appear with me on TV and personal appearances in the night clubs and theaters, but trying to get these people out of Nashville is like trying to get gold out of Fort Knox. Of course, I can hardly blame them.

There, they live happily-each in his own home with his own family in the comparative quiet of Nashville with little, if any, "everyday stress and strain"-and they are netting much more money that we could ever hope no manage for them up here. (Even at minimum scale, a quartet is expensive radio fare!) In addition to the fact that their voices blend superbly, they have great versatility. They are as much at home with Homer and Jethro as they are with Perry Como. Their musicianship is such that they can sight-read anything put before them and are equally capable of turning out a "head" arrangement on the spot, which will sound as though they had worked on it for weeks.

You will love this album. Mr. Mancini, who has won several Academy Awards, writes some of the most beautiful music extant, ranging from the hauntingly melodic Moon River to the highly satirical Pink Panther Theme. The Anita Kerr Quartet meets him more than halfway, and the magnificent blend is that which is preserved on the album you now have in your hand. You, I am sure, will play this album over and over as I already have. It is one of those rarities which grows on you - the more you play it, the more you will want to
play it again. It is a great pleasure to commend this Anita Kerr album to you most heartily.