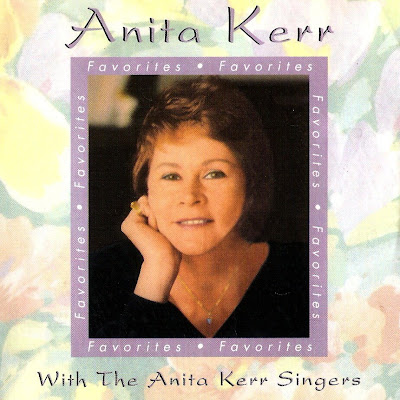 Back in 1950, when Anita Kerr recorded her first album with her eight-voice group, The Anffa Kerr Singers, she launched a career that has spanned more than tour generations, arranging for and performing with a virtual who's who of the music world: Burl Ives, Eddy Arnold, Brenda Lee, Perry Como, Pat Boone, Rosemary Clooney, Bobby Vinton, Roy Orblson, Willie Nelson, Al Hirt, and many others.
Anita has received seven Grammy Award nominations; three Grammys, including one for "A Man and a Woman," as well as Gold and Platinum records, including one each for her collaborations with Rod McKuen and the San Sebastian Strings. In 1992 she was awarded the NARAS Governor's Award recognizing her outstanding contributions to American Music. She was also the first woman ever to score a full motion picture, for the Universal film "Limbo" (1972).
Anita Kerr has built a loyal following of listeners who appreciate her gen-, tie vocal stylings and timeless arrangements. Favorites is a compilation of Anita's best loved songs... personal choices of both Anita and her fans.

The Fool on the Hill