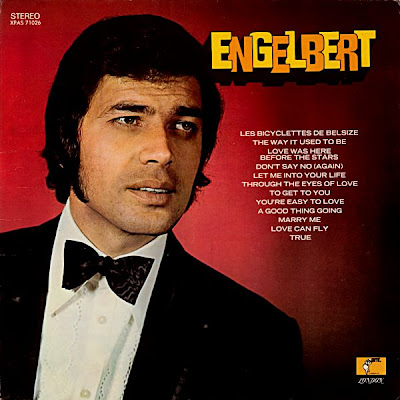 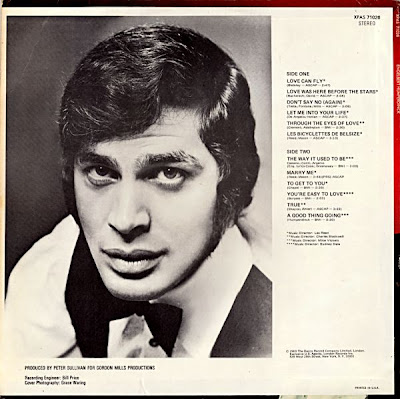 Engelbert is a classy and respectable album from the adult contemporary singer featuring one of his three hits from 1968, "Les Bicyclettes de Belsize," with music direction from Les Reed. It's not as easily recognizable as his other eight Top 40 entries, and just bubbling under the Top 30, it was the second-weakest showing of his nine-song chart run. By the same token, Burt Bacharach and Hal David's "Love Was Here Before the Stars" isn't their most familiar melody, but with Peter Sullivan's perfect production, and again with Les Reed as musical director, it works for the audience who bought this stylish romantic music. More than a dash of echo embellishes the voice on "Don't Say No (Again)," along with some pretty bells and laid-back accompaniment, giving Humperdinck the platform to display his smooth and strong vocal prowess. The formula works on all 12 selections, with "Let Me Into Your Life" another consistent trademark album track. Charles Blackwell handles the musical direction on "Through the Eyes of Love," while Mike Vickers does the same with "The Way It Used to Be," Roger Cook and Roger Greenaway writing some English lyrics for the Argenio/Piero Cassano/Conti melody. A fourth music director, Sydney Dale, is brought in for "You're Easy to Love," while Mike Vickers helps Engelbert out on his own composition, "A Good Thing Going." It's not the best tune on the album, and certainly didn't cause the team of Reed and Mason (who composed the hit here along with "Marry Me" ) to lose any sleep, but with the strong production and impeccable middle-of-the-road sound it blends in perfectly.
Joe Viglione, All Music Guide

Let me into your life

Love was here before the stars