The Sound of The Anita Kerr Singers 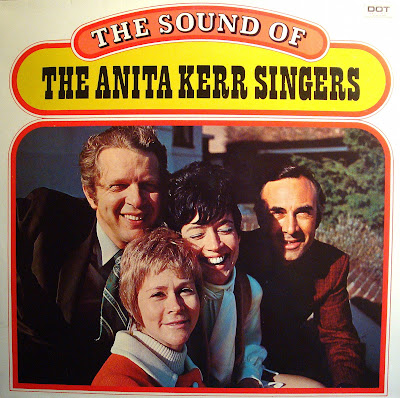 Anita Kerr is easily the most remarkable and accomplished female musician of the Space Age Pop era, yet she barely rates a mention in most pop music reference books. When she does, it's usually so the writer can make a wisecrack about her 1965 Grammy Award.

See, in 1965, her quartet's album, We Dig Mancini!, beat out the Beatles' Help! for the award for "Best Vocal Group Performance," a fact that's used to damn the record industry for its ignorance and perfidy. While the Beatles, the Rolling Stones, the Temptations, the Beach Boys, and others were at the top of the pop charts, the Grammy electorate preferred to recognize a group of thirty year-olds with mortgages.

Now, in hindsight, it wasn't a completely inexcusable choice. Help!, after all, by the admission of Dave Dexter, Jr., the Capitol Records exec responsible for it, wasn't even intended to be an album, and Dexter and George Martin had to dig up a few incidental instrumental tracks from the movie just to pad out the vocal numbers. And the offerings from the other competitors--We Five, Herman's Hermits, and the Statler Brothers--have certainly not aged as well as We Dig Mancini!, which many Space Age Pop fans with plenty of listening time under their belts rate as one of their all-time favorites.

At a time when most women in music were still considered "girl singers," Anita Kerr was routinely pulling off triple plays: not just performing, but producing and arranging her records as well. And she did it more and more, expanding her scope beyond her own groups to others, including several purely fictious ensembles, as well, even as she moved from one major label to another.

Make The World Go Away