Hugo.Montenegro & His Orchestra ~ The Good The Bad & The Ugly 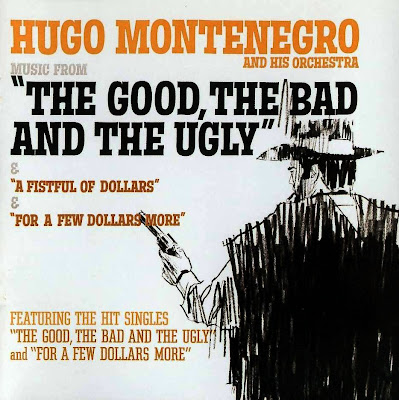 The Man With No Name" has made a name for himself after all via three hard-hitting, action-packed motion pictures in which a new kind of screen hero - or anti-hero - is born. The "Man" is a cold-blooded, cigar-smoking gunslinger who appears unannounced in Western towns where trouble is brewing and plunges headlong into battle with the troublemakers. By the time he moves out again, the towns are usually a good deal quieter, and the townspeople find that much of their population has been moved to the cemeteries. Clint Eastwood, the rugged actor who was once known to TV viewers as the star of the "Rawhide" series, first portrayed this enigmatic character in "A Fistful of Dollars," which was set in a Mexican border town and dealt with two rival gangs involved in selling contraband whiskey and guns to the Indians and the Mexicans. The "Man" and the movie won so much acclaim around the world he was asked to stands by itself as far as good listening is concerned Written by one of Italy's foremost composers  Ennio Morricone, it is played here by Hugo Montenegro and his orchestra. The selection entitled For a Few Dollars More was originally released as a single and scored a tremendous success for Montenegro. In addition to this hit, the album includes many hauntingly exciting compositions.

Sixty Seconds To What?

Email ThisBlogThis!Share to TwitterShare to FacebookShare to Pinterest
Labels: Hugo.Montenegro