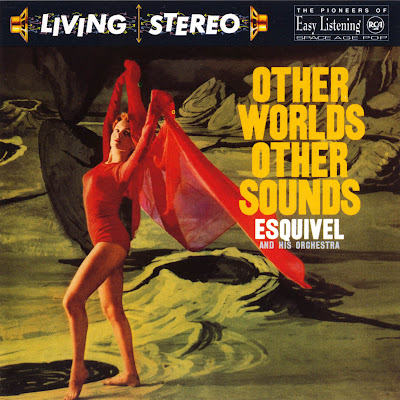 For his second American LP, released October 1958, Esquivelplays piano and provides arrangements not just for the 26-piece orchestra, but for the six-member Randy Van Horne Singers as well. The majority of the "singing" consists of various "zu," "ooh" and "ah" sounds, but that's all part of the charm. This three-day session was Esquivel's first opportunity to experiment with stereo recording. His dynamic use of the two-channel recording process is exciting and inventive. It's here that Esquivel's trademark sound starts to emerge. 'Course, most people probably bought the album because of the cosmic hottie on the cover and, I imagine, were amazed by Esquivel's quirky sound on first listen.

Email ThisBlogThis!Share to TwitterShare to FacebookShare to Pinterest
Labels: Esquivel